People are always traveling to different destinations and in many cases, they wake up very early in the morning to make sure that they arrive on time where they are going, some happen to be going to their workplace while some are traveling for many different reasons using cars, be it their own cars or public transport, but one thing for sure is that whenever you get into a car to go somewhere, there is no guaranteed that you will come back home safe since accidents happen anytime, anywhere just like this one that reportedly claimed the lives of every passenger who was in a minibus taxi.

The people of Pietermaritzburg woke up to the devastating news of a horrific accident between a heavy-duty truck and a minibus taxi that happened in the wee hours of Saturday morning.

According to reports, a head-on crash happened at Wembley on the N3 where after the collision, the Toyota Quantum minibus taxi caught collided with the truck head-on and fire sparked between the two vehicles, it is reported that all the occupants of the minibus died on the scene due to the injuries they sustained on the impact of the crash and the fire. 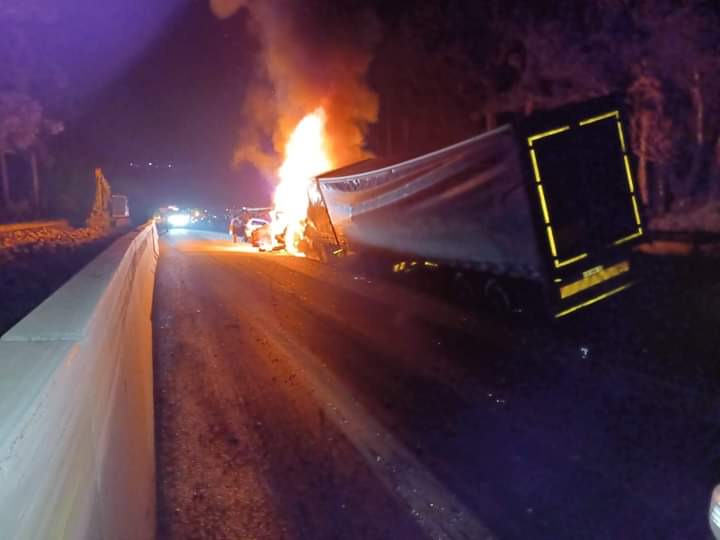 “It happed earlier this morning on the N3, Wembley, Pietermaritzburg. As officers were busy attending the first accident a truck came and collided, and it seems like almost everyone caught fire. Accordingly to people on the ground now, the people on the taxi seem to have lost their lives,” reports suggest.

It is not yet clear what really happened to lead to the accident, but judging by the images, you could see that it was really bad, the fire consuming up people’s lives as they leave their loved ones behind, nothing has been reported about the driver of the truck though, but in many cases like this one, the driver usually walks with minor scratches since the truck happens to be bigger than the taxi.