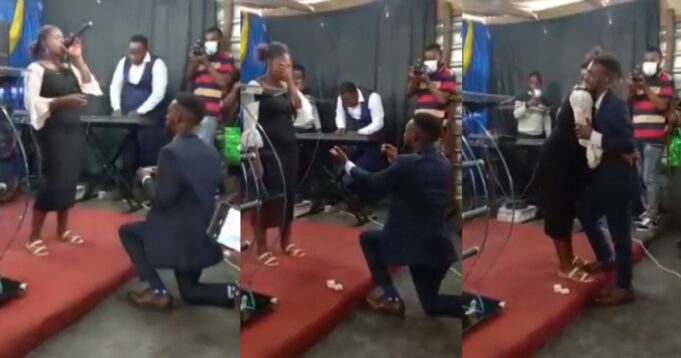 A video trending on social media shows the lovely moment a young man proposed to his girlfriend during a church service.

The young lady who is a choir member was leading worship session when the Christian brother went down on his kneels in the presence of all the congregants to propose to her.

Her eyes were closed while leading the soul-stirring worship and was oblivious to the fact that her man was kneeling down in front of her.

Man proposes
When she eventually opened her eyes, she saw her man on his knees holding out a ring box and became awash with emotions.

Without any hesitation, she accepted her man’s proposal and gave him a hug. The young man also gave her a gift bag.

Following the emotional proposal, the couple knelt down before the altar for the pastor to pray for them

In other news, a lady’s somewhat odd reaction to a car gift from her boyfriend has stirred reactions online.

In the clip currently serving the rounds online, the lady received a vehicle as a birthday gift from her beau.

The video captured the moment the lover boy took his girlfriend to the spot where the automobile was parked while covering her eyes with his hands.

However, instead of being overjoyed to see the whip as one might have anticipated, the woman reacted angrily and questioned the man’s decision to surprise her with that brand of vehicle.