How Much Is This Coffin? People We’re Left With Questions After What They Spotted On This Coffin

How Much Is This Coffin? People We’re Left With Questions After What They Spotted On This Coffin Yesterday was one of the hardest days for South Africans, as they were sending their beloved artist Mampintsha to his final rest. Mampintsha passed away last week after suffering from a stroke. Some people were still in shock and hadn’t believed that he was really gone until yesterday, when they saw him laying on his coffin. His funeral was very packed, and it was one of the most expensive funerals. The government has volunteered to cover half of all the costs that will be incurred. Speaking of that, Mampiywq was sent to his final rest in one of the most beautiful and stylish coffins; it was a white coffin with some golden color. Most celebrities are sent to rest in a white coffin, but this one had a golden touch, and you could tell that it must be very expensive. However, some people on social media were criticizing it, saying the family and government wasted money on the funeral while there are poor people out there.

Following all that, on social media, people want to know how much this coffin cost because it looks very expensive. They are asking for its price. Many people were shocked to see people asking about the price of a coffin; in response, they said they were asking because the coffin was bought with tax payer money since the government was helping with the funeral costs. in my opinion, I think it’s a bit disrespectful to ask about a coffin’s price; some things are personal and only concern family members. Black people seem to waste more money on the funeral, trying to ease their pain. At this stage of life, nothing matters whether the coffin is R1 million or R1000; the pain is the same. It’s over, and no amount of money spent will change anything. May his soul Rest In Peace. 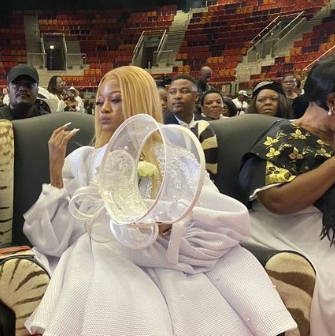