Happiness! Musa Mseleku Melt Mzansi’s Hearts After He Become The Best Father Of The Year

Happiness! Musa Mseleku Melt Mzansi’s Hearts After He Become The Best Father Of The Year This is a Musa Mseleku Appreciation Post For been the good father and the best
His Relationship with his and Abongwe 😘😘😘 so beautiful to watch and witness May God Spear him for Years to witness his children success#Uthandonesthembu pic.twitter.com/bkHr6kc0Hy

Otherwise Mseleku is a good father no doubt about that. 🤌🏽 ❤️#Uthandonesthembu

We can all agree that Musa is a great father. People can say what they may about the man, but Musa Mseleku is really a good dad to his kids. His relationship with Abongwe is just priceless. People were left overwhelmed in last episode when Mseleku asked Abongwe about the matric dance, about the partner and sexuality, it made her feel comfortable without being rude, pushy or invasive.

In the latest episode of Uthando Nes’thembu, it was Abongwe’s big day, her matric dance. Abongwe was anxious but excited. There was a small thing that was preventing her from being existed, which is the car. She was anxiety that she has not seen her car.

Musa Mseleku went to BMW, and asked them to give him any car they have. He did not choose it because he was not going to be able to explain the kind of car Abongwe wanted. Musa also bought Abongwe flowers. People don’t say how nice it feels to get flower’s. To top it off, it’s a money bouquet. According to Musa, Abongwe was supposed to them in the car when she leaves. Musa bought her flowers because she broke his heart when she said that her date wasn’t coming.

Musa Mseleku really pulled the car as she did not trust him, he made her doubt him when he said he’d get her a Quantum. Abongwe went to matric dance to set a standard, so people must know who she has arrived. Mpumelelo organized bodyguards, they picked them along the way. Mpumelelo made things happen and she was the boss. 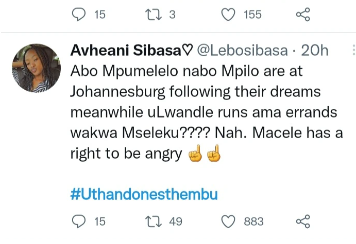