DJ Zinhle is dragged into her boyfriends allegations

DJ Zinhle is dragged into her boyfriends allegations

Before being paraded by DJ Zinhle, Bongani was dating Lerato Matsoso. Their relationship started in 2014 until he started hooking up with DJ Zinhle. It is said Lerato was pregnant at the time pic.twitter.com/qzwi4kaD7E

DJ Zinhles relationships are always public, therefore it is always hard for her to have privacy.

She dated AKA, on and off before they decided to spilt up completely, however the duo shares a daughter together and they are co-parenting pretty well and they are even wishing each other father’s and mother’s day and that has had their fans thinking of their current partners as they deem what they are doing disrespectful.

While other may have thought, that Dj Zinhles new relationship with Bongane won’t bring any drama like her previous ones, it seems they counted their chickens too soon.

It is alleged that, DJ Zinhles boyfriend, is deadbeat father to his one year old son yet, he is all involved in his daughters life whom he shares with DJ Zinhle. 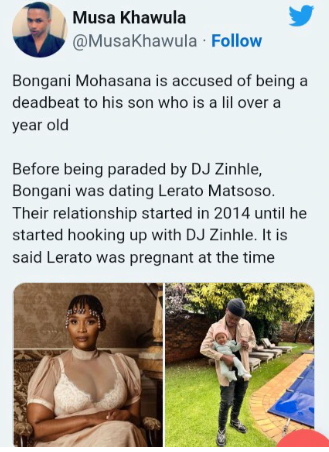 “Bongane Mohosana is accused of being a deadbeat father to his son who is over a little year old”, read the tweet

Content created and supplied by: Pamart92 (via Opera News )