The entertainment industry continues to be covered by a dark cloud as actors, artists and performers pass away at a short period of time. Not so long ago we were bidding farewell to Siyabonga Zubane after it was reported that he committed suicide. It has been revealed that prolific actor and producer Busi Lurayi has unfortunately passed away. Join us as we unpack more of the story below. 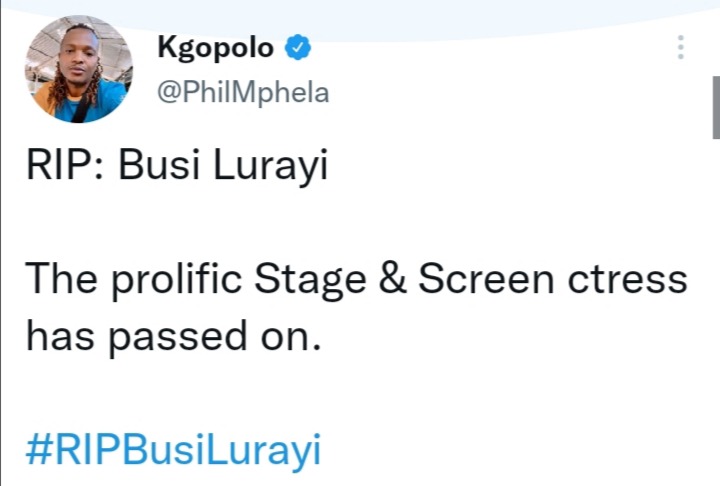 Entertainment Commentator Phil Mphela has revealed that the 35 years old actor has passed away (no information about her death has been provided as of yet). She became popular after her stellar performance on SABC 1’s sit-com City-Ses’la. How can we forget her role on the musical remake of Sarafina back in 2013. She also starred on Sokhulu & Partners, Generations The Legacy and other big productions.

Words of condolences continue to flood the TL as people are in shook as to what might have led to her death. She has contributed enormously to the entertainment industry and while at that – she made sure to keep her life discreet and away from the public eye. We were all looking forward to her latest casting on How To Ruin Christmas by Netflix.

What are your thoughts about this story? Let’s keep the conversation going on the comments section below and remember to follow us for more informative articles like this one published daily.

Content created and supplied by: ShakersAndMovers (via Opera News )