Andile Mpisane mommy’s boy spotted wearing some boots costing a million, could it be?

Andile Mpisane mommy’s boy spotted wearing some boots costing a million, could it be?

It seems mzansi is yet again behind the mpisane spoilt brat after some pictures of him and his wife were spotted and has been trending on twitter social network platform. Andile is not Mzansi most loved rich kid but yet he gets their attention, he was recently posted wearing some high wedge boots. Though the boots did not match his outfits twitter investigators were able to say that, the boots that he was wearing cost a whopping million at Lost Angeles at some boutique at America.

Here are the pictures taken and posted on twitter and his lady.

As the pictures were posted one twitter user was able to reveal the exact amount of the shoes on the comment’s.

Here is the screenshot of such revelations. 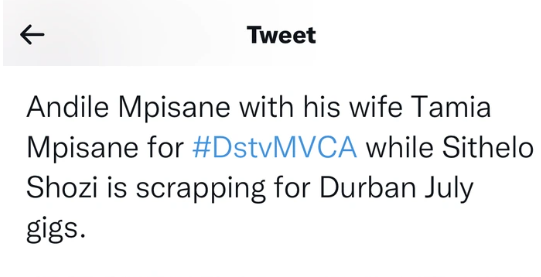 After the picture was posted here are some few comments and screenshots of the comments from when the pictures were posted.

Content created and supplied by: Nanakie@1 (via Opera News )