67-year-old woman shot and killed in broad daylight while washing a carpet: RIP

67-year-old woman shot and killed in broad daylight while washing a carpet: RIP 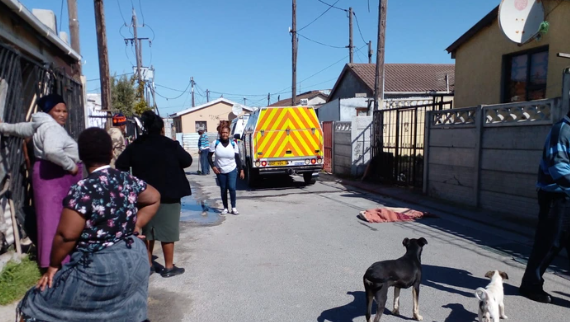 Almost all of the people residing in South Africa right now are vicious people. They spill blood with ease and still go on living their normal lives.

Today at Reliable News we are saddened by the most horrible incident that took place in Khayelitsha. A 67-year old woman named Mrwayi Wezekawoke lost her life after being shot while washing a carpet on Friday morning. Khayelitsha residents were shocked by the vicious incident.

According to eye witnesses, four men arrived in a taxi and shot Mrs Wezekawoke on the head and chest. Mrwayi put her carpet on the street pavement to wash it not knowing it was going to be her last day on earth.

Mrwayi’s death took a toll on her husband, Madala Baba Masimini. She was his pillar of strength and a dear friend, but now that she’s gone, he will become a loner.

Who on earth kills a 67-year-old woman? The eye-witness further said that they ran to the nearby yard for they were scared that the barbarians would also shoot them if they don’t hide. Mrwayi’s murderers did not look fazed by what they did. In fact they drive slowly even after committing such a heinous crime.

Khayelitsha is grievously affected by crime. It is a place where one needs to tread carefully at all times, be it in broad daylight or evening. Bheki Cele need to assign a task to the police to go to Khayelitsha in large numbers to raid the place. The residents can’t go on living in fear.

Many more lives might be lost if the police don’t do anything about the crimes affecting Khayelitsha. Everyone should live in peace. Community policing forums also have to turn the place upside down and gather every information they get until they find the culprit(s) who killed Mrwayi Wezekawoke.

May her soul rest in peace !